The time is quickly approaching for me to leave this city and country and continent. Just 7 more sleeps, as John would say! So at this juncture it seems appropriate to reflect on my stay here: what I have brought, what I have learned and what I will do next.

As to what I have brought, first and foremost I came with information that the women who are beneficiaries of Tubahumurize did not have before. I have given workshops in first aid, hygiene, women’s reproductive cycle and nutrition to several groups of women as well as to the sewing students. All were well received, but if I had to pick three things that were most useful to these women, I would choose the following.

First, each and every woman, young or old, was totally entranced by how their bodies function, especially their reproductive organs. Women in their childbearing years were super-interested in their menstrual cycles and how to avoid getting pregnant! Everyone wanted to know how twins came to be. Most were delighted to learn that it is the male sperm that carry the sex of a child. Women approaching and in menopause were very interested in all the changes taking place in their bodies. I think all the women were really relieved that pretty much everything they experience is normal. As well, it may have been the one and only time these women and girls have had a chance to talk about such matters frankly in a group. 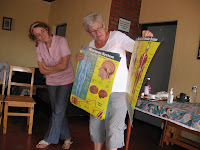 Second, in the first aid course, they were completely absorbed by the large charts I brought that illustrate the digestive, circulatory, nervous and skeletal systems. (These charts, by the way, I plan to donate to a free clinic nearby.) They loved discovering their pulse and having a glimmer of the miracle that is the human body. There is so much that can go wrong, it is truly something that most of the time, it works like a charm! I think they have a much better understanding about preventing illness, through good hygiene habits and assuring the care of wounds and burns. As a sidenote, in Rwanda, the custom is to put oil and sugar on a burn to help it heal faster! This is pretty counter to anything I have ever heard, so I simply told them what is standard practice in Canada. They were all also very interested in learning how to cope with diarrhea, especially in children.

Finally, in the course on nutrition, everyone was very interested in the three major food groups, carbs, fats and proteins, but especially interested in the whys of foods that are not very good for us, especially in the prevention of diabetes, which is rampant here, and heart disease, which is no doubt rising along with obesity. Because meats and eggs and cheese are relatively expensive here, the main sources of protein are from beans and peanuts. The women seemed reassured to learn that beans are actually a very good source of protein and of carbs. Thus, even the poorest women can feel good about how she feeds her family.

I was amazed to learn that here, where just about everything is cooked on wood or coal, which is either hard to find or not cheap, it is not the custom to soak the beans before cooking them! Thus, learning to soak the beans the night before you want to cook and eat them was a real eye-opener, because they can see that this will save them money since the beans need less time to cook over coals. Such a small thing will make quite a difference.

Another thing I believe I brought is a small understanding of the use of herbs and spices in cooking. In Rwanda, basically the only flavouring is salt. And oil. And a spicy oil called Akabanga. Even Jeanne, who has travelled all over the world and eaten all kinds of different foods, here in Rwanda feels limited in what she knows how to cook because she doesn’t know how to use herbs and spices. She and her husband Aaron have loved everything I or Simone cooked and Jeanne pines after this knowledge. Since I brought a bunch of spices and have added to them here, that will be my gift to her: a bag containing all these spices and herbs and condiments plus a few recipes and some information about where herbs and spices are normally used. I think it will please her. 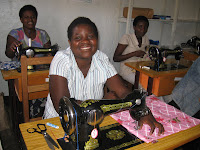 In the sewing area, I have dazzled more than one young woman (in reality, the whole class!) because I know how to sew, and on a treadle machine. I actually used a hand crank for a couple of years in the Yukon, but that is another story. I was sewing something in the sewing room here, with the whole dang group watching me with huge eyes, and I ran out of thread in the bobbin. They were amazed to see me wind it up on the bobbin thingy (I can sew, but I don’t know the names of the parts of the machine… :(). They, including the instructor, had been winding the bobbins by hand because they didn’t know that there is a small groove in the bobbin that allows it to stay in place for winding “automatically.” Again, such a small thing, such a big difference.

As well, my small project using old discarded fabric to make a quilt has become a real item here. They are amazed by the look when different colours are juxtaposed in patterns, random though they may be. Jeanne is completely taken with the idea of this sewing school having a specialty. To be honest, there are hundreds and hundreds of people throughout Kigali who sew, but mostly dresses, skirts, tops and such. She feels that if they can make quilts and sell them overseas, like in Canada, using African fabrics, then the students will both have a specialty and a source of income while they are in school. With luck, I will bring home their first quilt next week when I fly. That is the plan anyway. This knowledge of mine has the potential to really make a difference in the lives of the sewing students -- this class and those to come.

Also to the sewing students, Simone and I brought a sense of imagination through art and through English class. For example, we played Mystery Guest during English class; the students had to guess the identity of another student who was pretending to be someone else, based on the name written on a piece of paper they drew from an envelope. They had a lot of difficulty imagining how the person in front of them could possibly be someone else when it was so obviously Rosette or Jeannette or whoever. But they finally got the hang of it and thoroughly enjoyed trying to figure out the various identities! They have had very opportunities in their lives to imagine things beyond what is directly in front of them or to play.

Finally, in terms of what I brought to Tubahumurize (in addition to the funds and supplies donated, which came from all of you!!), I would have to say I brought a lot of love, understanding and happiness to these women. Jeanne has told me that before Simone and I came, many of the women were unhappy and listless. She has noted the difference in their attitude and their sense of joy and even playfulness since our arrival, with the introduction of English classes, workshops and yoga. In English class one evening, Simone and I were a bit stumped about what to do next and we decided to teach the women to sing Head and Shoulders Knees and Toes, a nursery school rhyme for preschoolers as you know. Well these grown women had a blast singing the song and acting it out! It is as though they hadn’t had enough time to play in their lives and were just happy to have ten minutes of complete fun! Our English classes are especially like that – lots of fun!

In terms of what I have been given, I don’t think I can begin to do justice to it using words. But of course I will try. The whole point of a blog, hello! I think the main thing is love. I have most certainly been loved here, for who I am. Nothing more and nothing less. What a gift! So many women have shared their deep gratitude to me for tiny things I have done. Hugs beyond belief. And what a gift to raise someone’s spirits with a word of encouragement or praise. Even remembering people’s names means so much to each person. How is this a gift to me? I think because what makes them feel good makes me feel really good, not for having done the thing but for having made their lives a bit better, even for a moment. The moments actually add up into something significant. I believe that.

As for what comes next, well I understand that returning to a developed country can be quite a shock. I am prepared to have a slow reaction of some kind. And it will take time for me to process my experience here, to make sense of it, the good, the bad and the ugly as it were. I am certain of that. And of course, I will have to send photos and gifts and letters and so on to my new friends here, asap.

But after all that, after I rejoin my friends, my husband, my great, big, growing family, my mother, my puppy, my cat, my book club, my granny group, my choir, my co-workers at the op-shop, after most of the dust has settled, I will be able to focus on the future. The future of me and Tubahumurize. What could I do next? What will I do next? I have a million ideas but am not ready to make any decisions or promises. But I think it is safe to say, “to be continued…”
Posted by Elaine Lowe at 10:59 AM