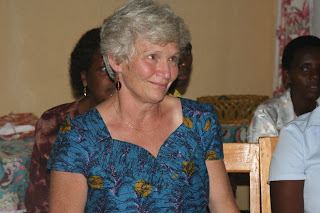 My final week in Kigali was spent in a blur of activity. Packing was the easy part. But still I had things I wanted to do. One last workshop. One last English class. Get that bicycle for Simeon. Go to Jeanne’s thesis defense. Give away a bunch of stuff to the sewing students. Plant the orange tree. Final fittings of the clothes I had ordered. Finish the quilt. Have a party to say goodbye. Somehow, God was on my side and I got to do it all.

As I have said before, life in Kigali is simple, and yet everything takes time and offers up complications. Take the bicycle for Simeon. Sandrine, Jeanne’s daughter, found one for sale in Nyamirambo and was able to negotiate a good price. The bike was delivered to Jeanne’s home during the party after her thesis defense, which was awesome! (You see how all these things stack up and blend together?) The bike is glorious. Black, heavy, very used but exactly what Simeon will be crazy for. And for a price that is reasonable. I pay up. 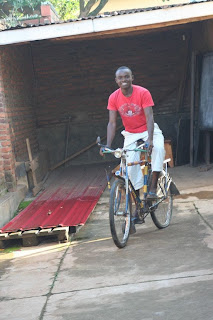 But now the bike is in Nyamirambo, which is about as far away from Kabeza (where Tubahumurize is located) as it could be. And Jeanne is afraid that if Simeon rides it, the police will seize it as it is illegal to bicycle on the main roads. So another plan is hatched and the bike arrives by taxi in a pickup truck. The deal is that Simeon has to pay for the taxi. That seems fair. And then he is the proud owner of this clunky, overdressed bike with balding tires. He is over the moon! He rides it with gusto! He is already tinkering to tune it up.

Giving away my belongings to the sewing students was truly a joy. Bit by bit, over the course of a few days, I would walk out into the courtyard with some items in my hand. What really blew me away was how the students were not greedy at all. They would see something and say, oh, that should go to Léah. Or to Soulange. Or to Madina. I was so delighted with their generosity towards others, and their sensitivity to those who were desperately poor, but who keept it well hidden. Everyone ended up with one or two things of mine that I hope they will enjoy and perhaps cherish. Certainly, they will remember me by them for awhile. 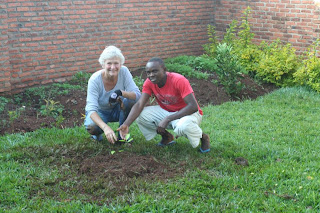 On the morning of my departure, I got up early and Simeon and I planted a small orange tree. This tradition is for everyone who comes and stays and supports to plant a tree. I packed my filthy jeans! I hope to go back and see how big the tree has grown.

As for the party, I wanted to invite the women of the community to come and join us for a drink (Fanta) and some small tasty appetizers. Jeanne got the word out to the women. I spent a few hours picking up supplies. Sandrine did some baking and the women in the kitchen were amazing. Suddenly it was all ready, trays of food, boxes of drinks, and the women were arriving. Women from the workshops. Women from the English classes. All the sewing students. 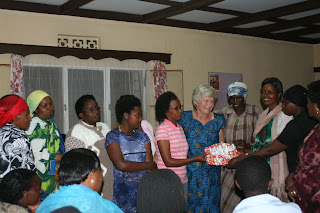 It was quite overwhelming when I saw them all there. Some had walked from quite far away. The food and drinks were gone in a minute. And then, even though I had said I didn’t have room for presents, there were some anyway. Along with lovely words to and about me.

I took my time, scanning the room and looking into each woman’s face, remembering them, the details of their lives. There were speeches. Jeanne had some very nice things to say about me, but the most touching thing for me was when Crescence spoke. She said that I had been like a mother to them all over the months. It really jarred me, but in a good way. It made me suddenly fully aware of the loss in their lives. So many women with no mothers. Some of them still so young. I saw that I had, indeed, however briefly, filled that void. I had opened my heard and my arms to them all, and they had felt loved and safe, as in the arms of a mother. 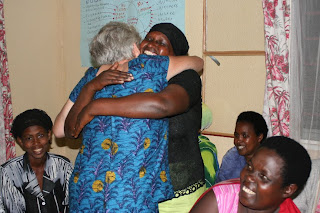 Her words and my thoughts were very much with me as I got into the car to the airport two days later. The weeping of the sewing students was not just for me. It was for what I represented to them. The losses they had experienced so early in their lives. I like to think that these tears they shed were healing tears.

My own tears came later, and they helped me heal too.
Posted by Elaine Lowe at 10:27 AM