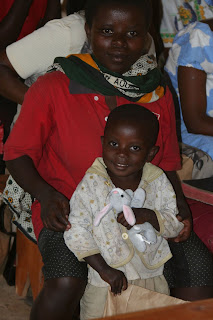 Muraho! (this means 'hi', or more exactly, 'I greet you.")
Kigali is a low, sprawling city. As far as I can figure out, everything is curves, both up and down and around, like the landscape of round, reddish hills in which the city sits. Between the curves and my absence of direction (the sun seems always to be overhead!) I never have a sense of where I am. I have taken to writing down the names of the various neighbourhoods. The one where I live and where the Tubahumurize centre is located is called Kabeza. Most of the city is built close to the ground, though there are buildings several stories high that are newer or being built as the country gets back on its feet and grows.

Although I am not at all certain of the population of Kigali, it seems there are people out in the street all the time, at least during the day, going about their business. Although there is a lot of curiosity about a white foreigner, I do not feel at all threatened; just a bit stared at. I try to wave and smile and people respond in kind. The children, all in various uniforms, are learning English in school and love to try it out on the likes of me, saying "hi" or "how are you", to which I respond in English, to their complete delight it seems. One of the most endearing things I see here is the way people touch each other. Men hold hands with men, women walk arm in arm or arm and waist. All greetings with people you know or people you are introduced to begin by touching or shaking hands and by either one or three kisses on the cheeks. Every departure involves the same ritual.

Little buses are everywhere, some old and worn, some new, larger and airy. I have now taken the bus three times, to the tune of 200 RWF per trip (about $0.40), including a transfer. The buses arrive at stops, as well as where people are waving them down. If you understand Kinyarwanda or have a good ear, you will hear the name of the district to which the bus is heading. I have no idea how it works, but somehow, I have managed to return to the centre or arrive at my destination each time. It feels like luck, but I am sure there actually is a system!

To be sure, I have not tried to take this trip without someone who is from the city and speaks the language. One day I will try with just Simone. The experience is pleasant enough, with country music playing (!!), and people either peeking at us or studiously avoiding eye contact. You announce that you want to get off by tapping the window and the people around you make a “psh, psh, psh” sound to get the person who opens the door’s attention. Somehow it works!

There are swarms of motor-taxis throughout the city, which is basically a motorcycle that accepts passengers. You can recognize them by their green helmets, which are numbered (they are the official, registered taxis) and blue helmets (a bit more sketchy, I am told, with no recourse if something bad happens).

Yesterday, I took my first motor-taxi ride with Valentin, the son of my host, who rode with a large bag of groceries I had bought, and me alone, sporting the obligatory passenger helmet. It was quite a thrill riding behind my driver, as they dart in and out of traffic, in their efforts to get you where you are going as quickly as possible. Negotiating a price for the trip happens before you get on, as it does, actually, before you show interest in any item you want to buy. The cost is based on how far you are going, just like a regular taxi only cheaper and more dangerous – but to me more fun. A tip is not expected but very much appreciated. It cost 800 RWF for Valentin and I to get home with the groceries, and I gave the two drivers 1000rwf (about US$5). Their smiles were very broad.

Today, Jeanne, Simone and I visited a group of women who are clients of Tubahumurize, indeed a few of whom I had already met, who live in a neighbourhood at some distance. We arrived by foot, then bus, then motor-taxi, then foot. We had the privilege of being invited into two of the women's homes, followed by the rest of the women and a gaggle of children too young to be in school. The children are incredibly shy and incredibly curious and incredibly beautiful. Before we left, I had asked Jeanne if I should bring something as a gift, especially for the children, and she said no. But I wish I had. I was able to share an energy bar with three of the children, who became a little more daring after that. And of course the oldest one conned the youngest, whose name is Prince, out of his share. The purpose of the visit was to get a sense of how the women live, even for Jeanne, as it was her first visit there as well.

The neighbourhood stretches behind the main road where the school, church and training centre are located. The houses are arranged in what seems rather like a honey comb, with many twists and turns on dusty paths. All the houses seem to be constructed of concrete – at least that is what I think it is. The women lead simple and probably difficult lives, as it is not cheap to live in Kigali, as I am discovering. And it is almost completely a cash economy. Beautiful bougainvillea spill over the wall that surrounds the neighbourhood, making the dusty walk quite enchanting.

For me, the highlight of our visit was when the daughter of one of our hosts, who is deaf from childhood meningitis, and who had quite a closed face as if she was not interested in us, discovered that Simone can speak sign language. All of us watched spellbound as Simone and Marie Jeanne talked in a very animated way, their hands flying as they signed, for quite a long time. I am sure it is not often that this young 17 year old feels so included in so-called normal life. They became bosom buddies, from all accounts, and MJ opened to me as well, as I am Simone's "tanti" -- her aunt.

The women all escorted us down the hill and out of the neighbourhood, a few vying to be the ones to put their arms around my waist or to talk with me in French. I had the feeling we had paid these women a great honour in visiting their homes and their neighbourhood. I am a bit uncomfortable with this, as it was a complete honour for me as well. And it felt a bit artificial visiting with no purpose than to be voyeurs. I hope it did not feel that way to them. It did not appear to be so, and for that I am grateful.

Enough for now. Murabeho! (good bye, or I bid you farewell). Elaine
Posted by Elaine Lowe at 11:56 AM