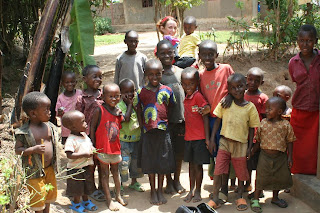 In the district of Kabeza where I am staying, all seems relatively prosperous. But that is only because what you see is on the main road, which is mostly commercial as well as is where the schools, churches and clinics are located. The road seems to more or less follow the crest of a broad hill, or it is at least elevated because about every 200 metres, there are roads that lead down the hill, from which other roads and paths twist and turn. All of it is inhabited with all manner of dwelling. The further down the hills you go, the rougher the terrain, and the more dense and crude the housing. Everywhere, the smell of charcoal fires burning. There are open drains everywhere, from which emanate all sorts of odours. Children gather water into large plastic jugs from open taps that spill into drains. At the bottom if the hill are banana trees, which sounds very exotic but is a breeding ground for all manner of pestilence.

Anyway, on Friday, Simone, Jeanne and I walked the treacherous paths down to the bottom of one of these roads to pay our respects to women who are members of Tubahumurize, but many have not been active members recently. It seems it is quite an honour to pay visits to these women in their own homes, as many of them took the day off so they would be there for our fifteen minute visit. We visited six homes in all.

There are hordes of children everywhere, all of them dusty, barefoot and ragamuffin. All of them with eyes like saucers to see two mzungus (white people) in their midst. A gaggle of children followed us everywhere. The children who go to school are learning English and they love to practice their little phrases like “good morning” and “how are you”. They always giggle when we actually respond! Anyway, the small children not yet in school broke my heart somehow, as they live in a very brown world. I seriously didn’t see a drop of colour down there. And yet, people seem proud of their small homes and possessions.

We went to Nathalie’s home, a woman I have met several times because she is active and attends the workshops. She is clearly poor but well off in comparison to others we met. Shie also HIV positive. She lives with her son David and her brother’s little girl, Solonge, with whom Simone fell in love. I had still a little doll from my bag of toys that I carry around that I was able to give her, which made her super happy. Nathalie showed us pictures of her wedding and it is clear that her life has been on a downward spiral recently.

Next we visited two of the women who make beads and jewelry, Crescence and Margot, in the former's home. I delivered the calendars so many of you helped me gather, for which they seemed very grateful. They were working indoors, with the finished beads on a table, stringing tiny beads onto nylon cord. They work in incredibly dim light, as there is just one small window and even that was half covered. There is no electricity. They both need glasses to do this fine work, as apparently so do all the other women who make beads, but have no money for such luxuries. They sell these beads in the market for a pittance of what people are willing to pay in North America for such painstaking work.

Next we visited Atanasie, a woman who is in truly dire straits. She is battered by her husband, who has left her but returns from time to time to do more damage. He drinks and has infected her with HIV, which has been passed to the children. He comes and takes, but brings nothing. Nice guy, right? She is actually afraid for her life. She has nothing to feed her children. She had a black eye on the day we visited. Her eldest daughter has been rejected by this man because she is a product of a previous marriage, even though the father is dead, murdered during the genocide. He refuses to allow the girl to be in the home. Whenever he appears, the girl runs away. I think the mother is the saddest woman I have ever met. Her eyes are just deep, deep with sorrow and, dare I say, hopelessness.

Simone and I asked Jeanne if we could bring her and her family to Tubahumurize for shelter, as she fears for her life and also that of her daughter. Jeanne said it was impossible as there are too many other women like her who need the same thing. I argued that perhaps it was better to help one rather than none, although I do see the dilemma. Aaron, Jeanne’s husband, who is a pastor and a very nice, gentle man, said perhaps the women themselves should decide, as that way the decision would be very democratic and inclusive. I think that is a great idea and perhaps something to work towards – setting up such a process. On the other hand, what happens after we leave, for example. How long could this place reasonably offer shelter? The long and the short is there is no women’s shelter in all Kigali. To build one is Jeanne’s real dream. There is surely a need.

Next, we visited Jacqueline, who lives in a tiny two room home with nine people – seven children and she and her husband. It is a very crude home and I can’t imagine doing much more in it than sleeping. And even that would be crowded. The amazing thing is she is one of the happier, stronger women, I believe because she is active at the centre and has responded well to the counselling. There is hope in her eyes. Her husband, who had been abusive, contracted HIV, and is now quite docile. He has not infected her and her children are all healthy too. He is willing to wear condoms.

At the home of Yolande, we were invited into a tiny room by her daughter, Leah, who is actually one of the students who is learning sewing. The site visit had been cancelled from Thursday and move to Friday but this message had not been passed on to Yolande. She had missed work the day before to greet us and was unable to take another day off. Thus her daughter missed a day of instruction in order to care for her youngest sister. The family clearly does its best living in such tiny quarters, but I fear it is an uphill battle, with crumbling walls and a dirt floor.

Finally, we visited Febronie, who sells tomatoes in the market. She is full of energy and even joy, even though her life is not easy. She has five children, the four youngest of whom I was able to give a small toy. They seemed quite pleased. I believe Febronie’s life has been vastly improved by a micro-credit loan. It may not show in her immediate surroundings but she has some pride and faith that things are getting better.

I came away somewhat shell-shocked and feeling very blessed. I have seen poverty before, but nothing really like this. And yet, and yet, each family really does its best to keep things clean, to eat, to care for one another, and to have a sense of dignity. I did not see one iota of shame in any of these women for the state of their lives. They have hope that things will get better, and most of them are taking steps to make it so, little by little.
Posted by Elaine Lowe at 9:02 AM