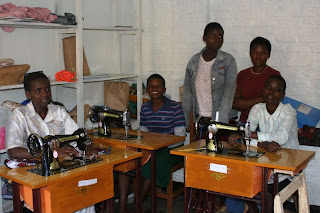 So many people were involved with fundraising through Give Meaning.com for the sewing project here at Tubahumurize. It is now into its second month and is a complete success from every angle. There were twenty students at the start, but several had to drop out for various reasons, though certainly not because they wanted to. There are currently 18 students – 16 girls and 2 boys – and we are in the process of bringing two more young women aboard, one of whom began the program but had to drop out.

Most of the students are 15-20 years old. Very nearly all of them are orphans whose families were killed during the genocide. They live in a variety of situations. Perhaps with a relative, like an aunt. Some have been taken in by women who are members of Tubahumurize. A few live on their own and a few are heads of households. Two or more girls live in households where they are basically servants and only with great difficulty have they gained permission to do their housework and attend our school. One girl gets up at 4 am so she can get here for 8 am. Three women have young children. Most students had to leave school early on. Only one or two have finished primary school and have attended some secondary school.


Their teacher is a woman named Epiphanie and she is really something. Very calm and patient, and obviously very talented, since the young people are learning by leaps and bounds. It was clearly not intellect that held them back in school! They are still working with used clothing, which they take apart and turn into something new. I am amazed at what they can do in such a short time and also at what they produce from sometimes pretty dowdy fabric. They make some pretty neat outfits! They are not quite ready to cut into new fabric but I would be willing to let any one of them make me something, as long as Epiphanie supervised the process!

The class is not just getting an education in sewing. They are also receiving a variety of other kinds of activities that will help them develop into more rounded individuals. For example, they attend workshops in health, nutrition, life-skills and English, and we offer them art classes, English choir, and soon yoga. As well, they attend trauma counselling, which right now is on an individual basis. They do not yet feel comfortable talking about their troubled young lives in front of one another. It is too new, even to them. They have perhaps never talked about what has happened to them. It is buried deep and is very painful.

The students also take turns preparing their midday meal. There is a large three “burner” coal burning brick stove, on which they cook their meals. The usual fare is beans and rice, which perhaps would grow repetitive for me, but for them is likely their main meal of the day, and by Rwandan standards, is pretty healthy. We have plans to put in a small garden, which the students can help plan and tend, and to raise chickens for eggs, again with the students in charge of building shelter from the rain and a fence. The fruits of the garden and of the chickens will also help to supplement their diets. 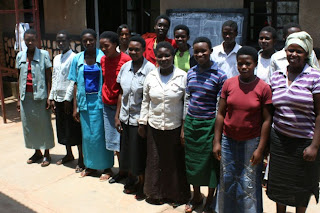 The lot on which the centre is located is perhaps 100’ wide by 75’ deep. The main house is quite spacious by Rwandan standards, with a large living area, where all the counselling and workshops take place, a small functional kitchen, an office, a bathroom, and two bedrooms, one with a private bathroom.

The students’ sewing area is behind the centre. The ten treadle machines are nestled into a small room. All of the cutting and patterning and hand sewing take place in the courtyard, paved with smooth, painted cement, between the main house and the sewing room. The students take turns at the machines, with half sewing and the other half working on other stages of their work. They learn from a blackboard, which is literally that – a board painted black – but it works! – and from listening to and watching their teacher. At the end of each day, the students work together to clean the courtyard, and at the end of every week, they clean all the cement areas as well as the courtyard kitchen area and the bathroom.

I have grown very fond of these young women and men. They are perhaps the most industrious young people I have ever met. Not one of them is looking for an easy way out. They all seem to take this opportunity very seriously and responsibly. In their lives, opportunities like this will likely be few and far between. 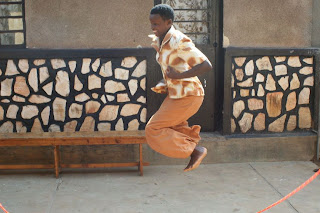 I love their names: Pascaline (2), Claudine, Ephipanie, Immacule, Clementine, Madina, Elvani, Osette, Jeanette, Soulange, Antoinette, Jacqueline, and Erique (2). Clearly I am missing a couple but I am working from memory here. I love their response to new things. I had brought a few skipping ropes, and one day I took one out for them to use. To see the joy on their faces, to hear their laughter – it was almost too, too good. They are so painfully beautiful, still children really. And probably never had much of a childhood, considering that most of them were three or four at the time of the genocide. To have lived through that, at no matter what age, was most certainly traumatic.

Every weekday morning, when class is just starting, the class sings a hymn and offers a prayer. They sound like angels to me, with their high, clear voices. So last week, I started a choir with those who wished to participate. They seem to love it and want to sing more than once a week. I am teaching them some pretty easy stuff, like This Little Light of Mine, Kumbaya, Summertime, Swing Low, and We Shall Overcome. They hardly know what they are singing but I do my best to explain in French and someone translates into Kinyarwanda at minimum, what the song is about. Basically, so far, it works. They love to sing, and they seem to enjoy learning and watching me as they rarely take their eyes off me while we are singing, and they copy me, even if I scratch my nose or something. My own choir instructor should be so lucky! It’s like they don’t want to miss a beat! (No pun intended… ) 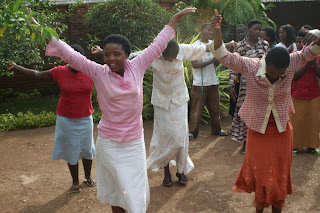 Just today, Simone and I offered the first art class. We introduced the concept of art – What is it? What kinds of things are art? Who can make art? They were engaged and interested but a bit mystified. I think very few of them had ever had an opportunity to do much that requires just imagination. The exercises we did today were very simple. One was with the class sitting in a circle, eyes closed, one behind the other. One person chose a shape and drew it on the person in front’s back. The shape transmitted was sent around the circle to the last person who then wrote the shape they received on a piece of paper. They had a lot of fun with that.
The second exercise was to draw someone else in the class without looking at the paper. You could see who had never drawn before, who was intimidated by the exercise and who really got it. It was pretty impressive really.

Next week, we asked them to think about what they might do if they were granted three wishes: what those granted wishes might look like. We will offer all kinds of materials for them to work with, from drawing to collage. I hope they will be able to share their wishes with everyone. We are also planning a large mural sewing project as well.

So these are the kind of things the sewing class is up to. Every day, they amaze me. They give me the most wonderful hugs and always smile and want to chat. They are somewhat shy but curious about everything. They think I am nuts because I have asked them to keep their cuttings scraps for me, with which I hope to piece into some kind of quilt, but which to them are garbage. Hopefully, I can show them such scraps’ usefulness. I try my best to be a kind of mother figure to them. Indeed, they call me Elaine but they also call me Mami, which is like older woman I think. I went out today with a bolt of fabric I had bought to show them. They approved enthusiastically.

They adore poring through the little album of photos I brought with pics of all my family and friends. For young people with little or no family, indeed from any woman with whom I have shared my family pictures, I have never felt one twinge of jealousy that I should be so rich in family and they so poor. Indeed, they seem genuinely delighted. One group of women actually applauded when I said I had a wonderful and kind husband. Most of them are either widows or living in abusive situations.

At the moment, there is a possibility that this project will receive money for an electric sewing machine that does embroidery as well as money for a serger. This will bring the students’ abilities to a much higher level. In fact, even the instructor would have to be taught how to use the embroidery aspects of the machine. But that is very much a fashion here, to put some gorgeous finishes on women’s clothing in ways I have never seen but certainly recognize as a form of embroidery. So we are all hopeful about that as that kind of skill will bring in more money for sure.

Simone and I are trying to come up with ways that the students can make some money, once their skills reach a certain level. This will be soon, as we are going with the teacher next week to purchase fabric for the first time. So we are planning and scheming on their behalf so they can begin to earn a bit. It may involve banking anything they make so that when they graduate, they will be able to purchase cloth or a sewing machine. This plan is in its infancy.